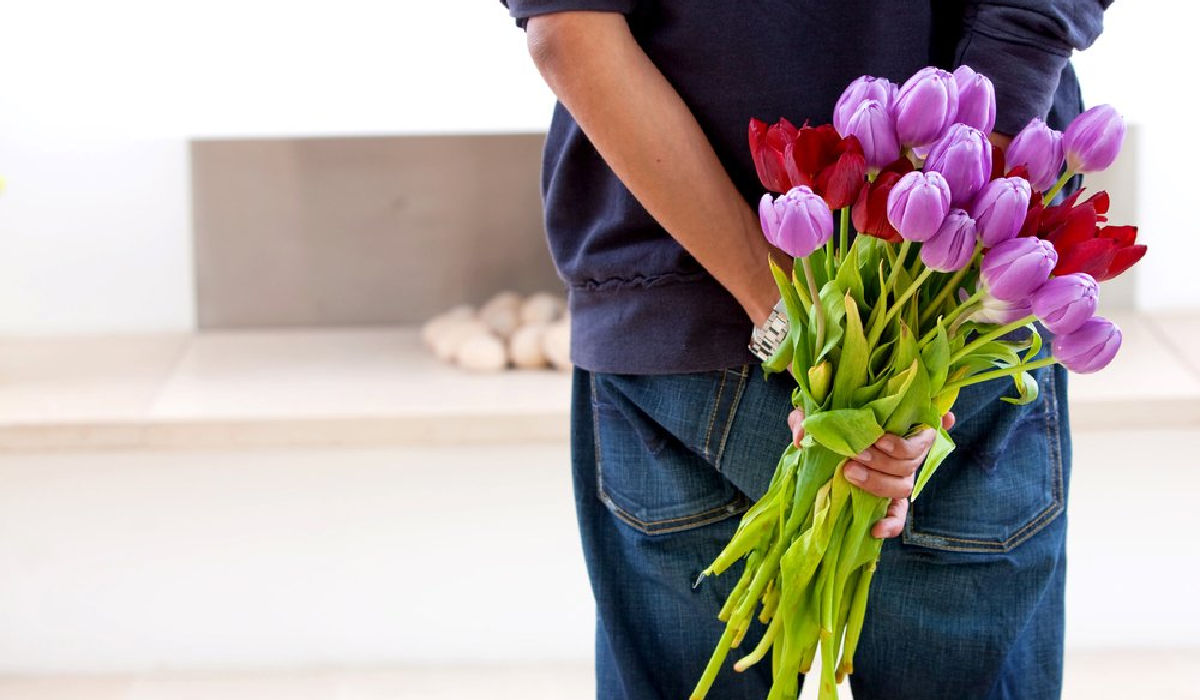 When it Comes to Buying Valentine’s Day Gifts, Who Procrastinates the Most?

Valentine’s Day is an opportunity to show love and admiration to the special someone in your life. And while they say true love waits, some Americans wait until the very last minute to show their affection to their sweetheart. 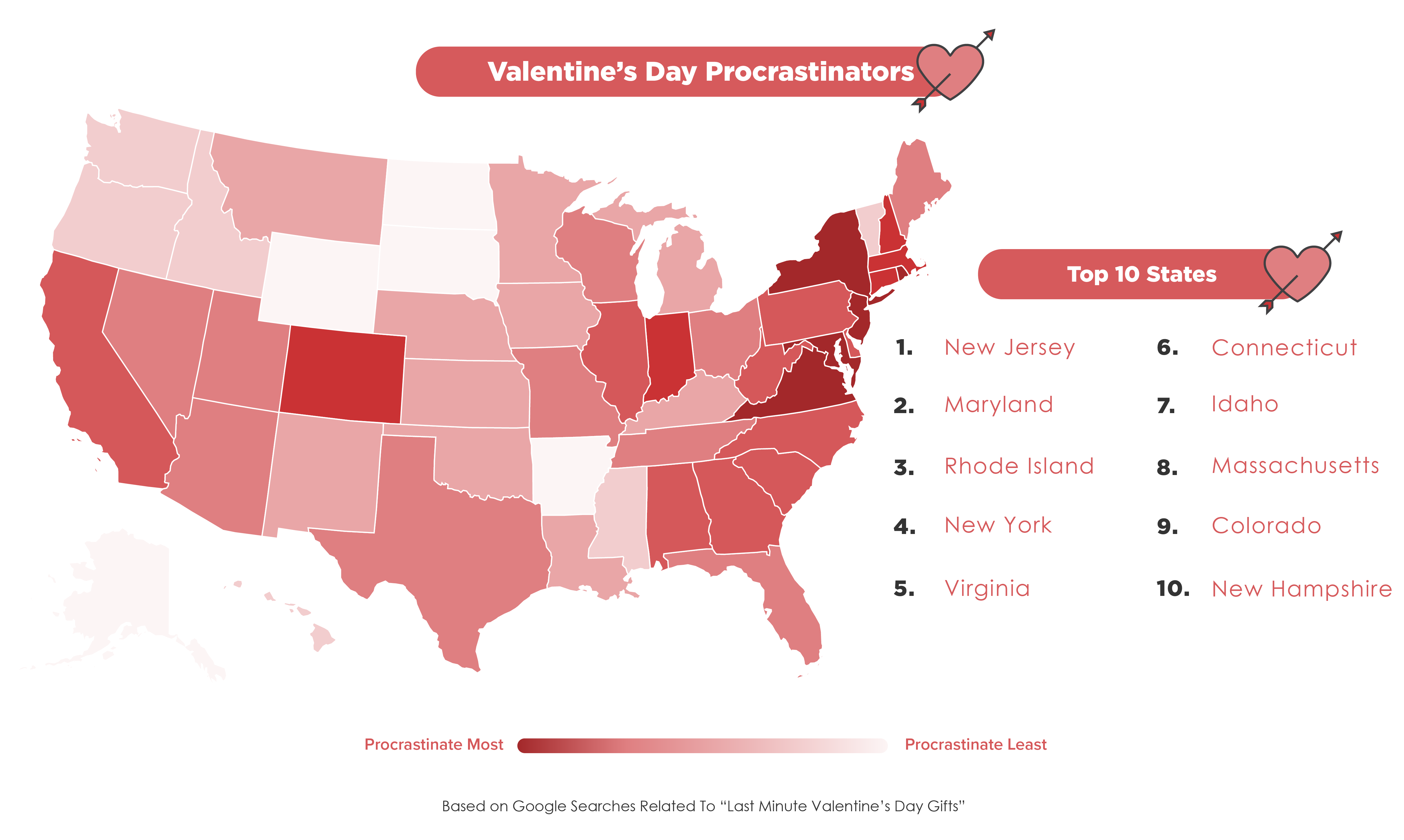 So, who are the biggest love procrastinators in the country? Turns out The Garden State of New Jersey proved to have the most Google searches for “last minute Valentine’s Day gift ideas.” Waiting until the last minute seems to be a trend on the East Coast as Maryland, Rhode Island, New York and Virginia round out the top five. What happened to “Virginia is for Lovers?” 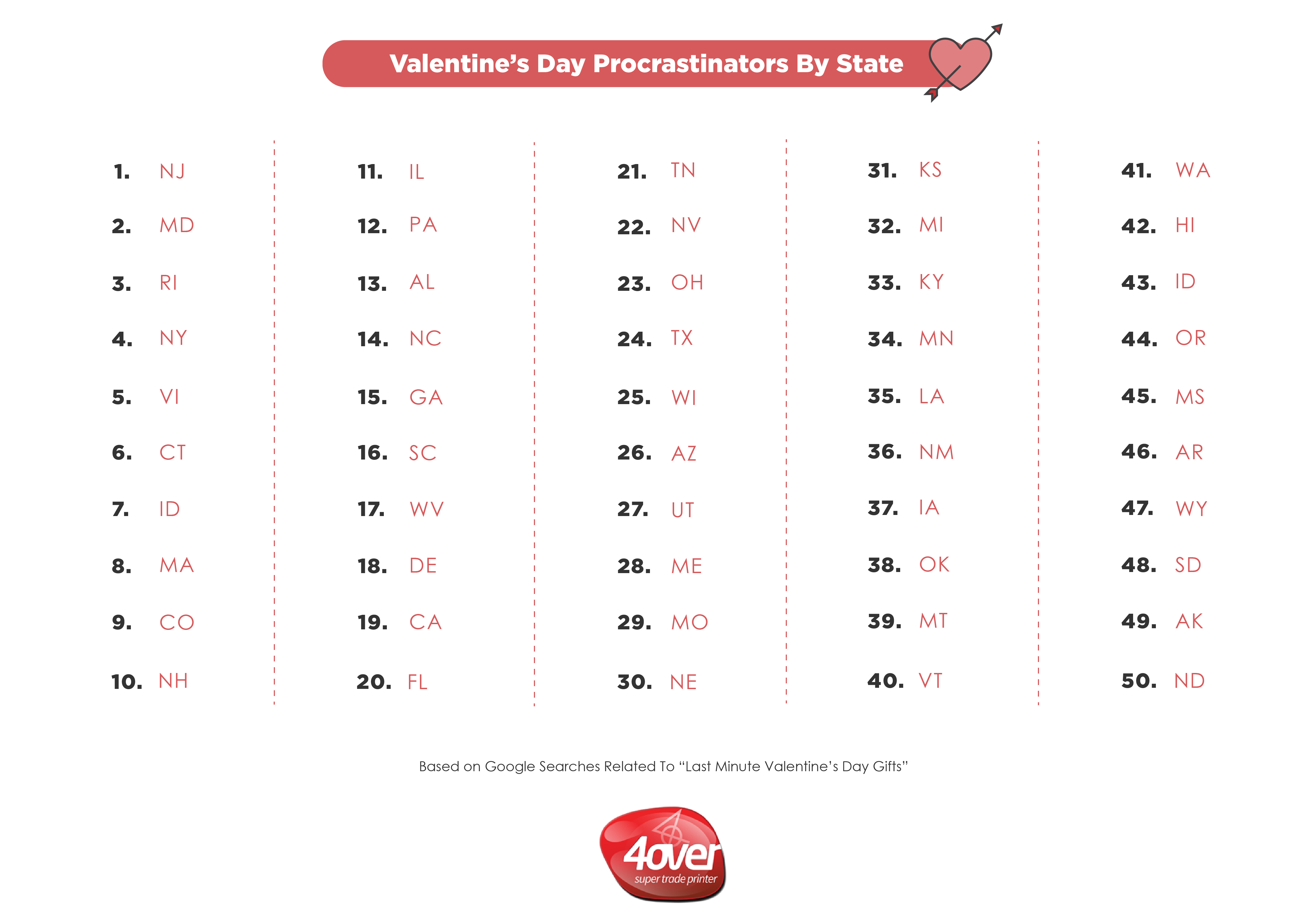 The states most prepared to celebrate their Valentine? North Dakota, Alaska, South Dakota and Wyoming.

Regardless of where they live, most Americans say they will be celebrating Valentine’s Day this year. In a survey of more than 1,000 people, 67% say they plan on celebrating Valentine’s Day this year and 50% admit to waiting until the last minute to buy a gift. On top of that, more than a quarter of Americans say they’ve forgotten to get a gift for someone they love. 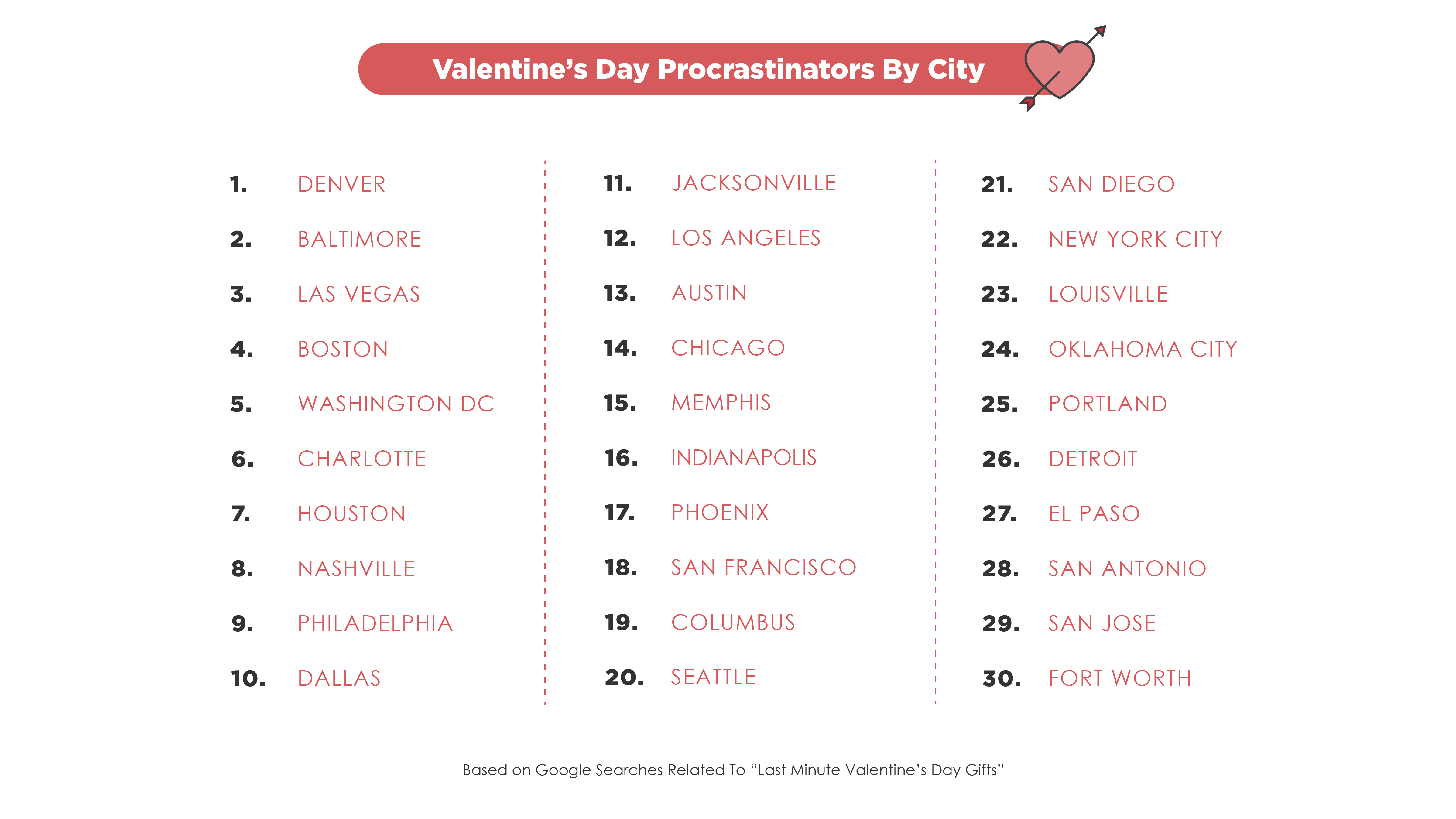 When it comes to buying last-minute gifts in the big cities, Denver residents take the cake for being the biggest procrastinators. Baltimore lovers also wait until the last minute. It may be no surprise Sin City rounds out the top three. Maybe they’re waiting to see if they’ll win big at the Blackjack table?

The cities with the least procrastinators include Fort Worth, San Jose and San Antonio. 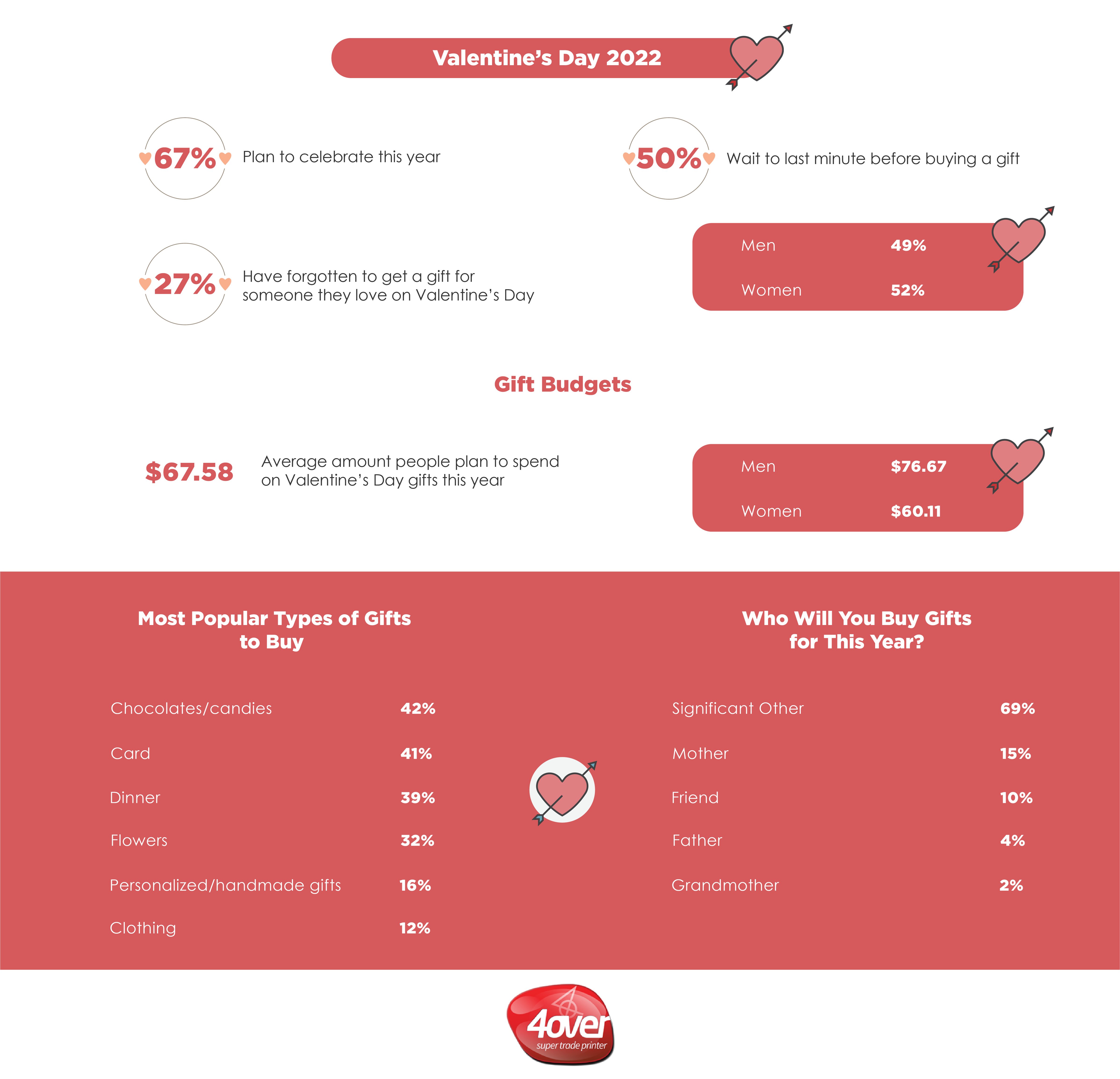 Although they say money can’t buy love, men plan to spend an average of $76 on their Valentine’s Day gifts this year while women spend around $60. The overall average budget? $67.58.

So, who will be getting these presents? 69% of those surveyed said they’re buying gifts for their significant other while 15% say they plan to get their mother a gift and 10% will be buying for their friend.

The most popular types of gifts to give are chocolates and candies, Valentine’s Day cards, dinner and flowers.

For this report, we analyzed Google search volume related to “last minute Valentine’s Day gift ideas” in all 50 states as well as the most populated cities across the country. We also surveyed 1,104 self-reporting Americans. 50% were female and 50% were male with an average age of 35. 25% were single, 37% were married, 28% were in a relationship, 5% were casually dating, 3% were divorced, 2% were separated or widowed.

4over LLC is one of the largest wholesale trade printers in the U.S., with multiple production facilities across North America. A trusted source of print fulfillment since 2001, the company helps large franchise printers, single print shops, print brokers, graphic designers, photographers, and every type of print reseller in between grow profitable businesses by offering a vast selection of quality products at guaranteed trade-only prices. With capabilities such as gang-run offset, digital, grand format, and promotional printing, plus state-of-the-art equipment, 4over offers every customer savings, selection, and scale. Not yet a 4over reseller? Register Today! 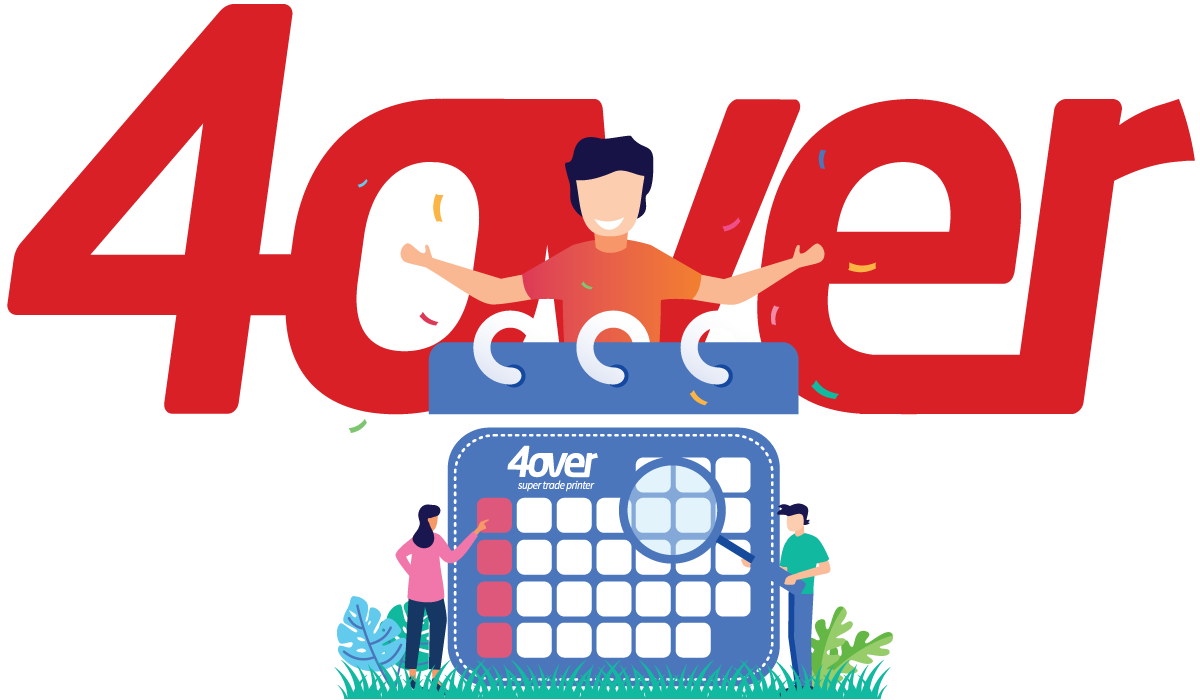 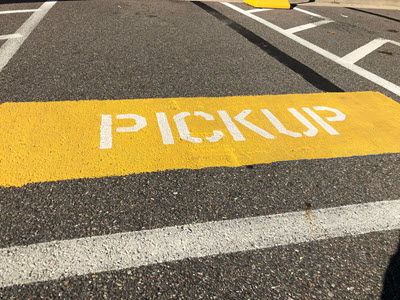 4over Pick-Up Hours - 4over Blog

Pickup Hours listed below are from Monday to Friday, excluding holidays. For a list of holidays, please view our Holiday Schedule.   City Hours Arlington, TX 8:00AM to 6:00PM Dayton, OH 7:00AM to... 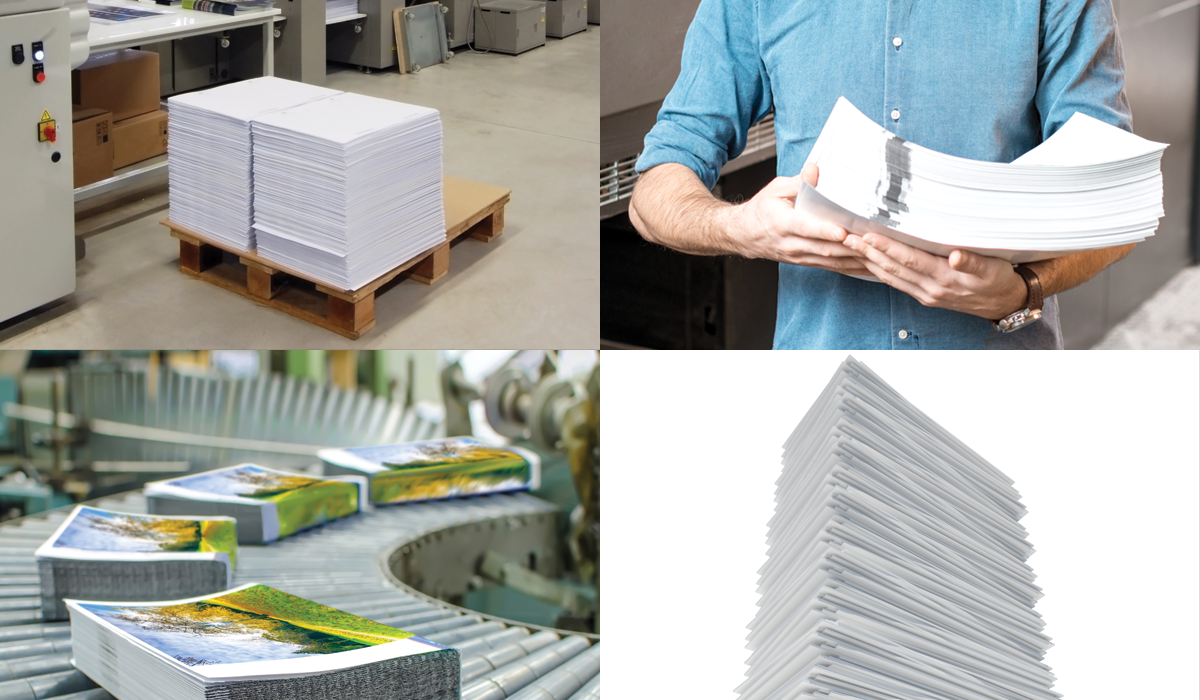 Paper Supply Chain Challenges and How To Address Them Head-On

As Covid restrictions continue to lift across the US, many employees are returning to their offices and businesses are experiencing rapid growth—but now we are now faced with a challenge: supply...

As one of North America’s largest trade-only printers and a trusted source for print fulfillment since 2001, 4over helps print, design, and other creative services resellers grow profitable businesses. We do this by offering a vast selection of quality print products at guaranteed trade-only prices. Our expansive e-commerce catalog includes everything from standard marketing collateral like business cards and brochures, to harder-to-find specialty, large format, and promotional products.